This book was a brilliant idea with poor execution. I’m frustrated by both the plot holes and themes, and I suggest you read it with very low expectations.

At first glance, it was all harmonious elegance and feminine delicacy. Yet upon closer inspection, little grotesqueries revealed themselves. Instead of smiling cherubs, little hobgoblins leered from the carved furniture finials. The carpet beneath my feet depicted stylized spiderwebs and flowers dying on the vine. I shuddered. (119) 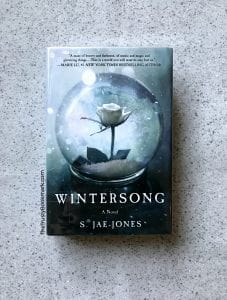 I…am disappointed by this book. 2.5 stars because I don’t regret reading it but I am really annoyed. I wanted to love Wintersong SO BADLY. The cover is beautiful. The blurb sounded fantastic. The prologue was mysterious and fascinating and intriguing. There were poems to inspire each Part. I got to buddy read it with the amazing Esmée. What could go wrong.

Literally everything. This book ended and my first thought was “…wtf”. What just happened to this story? Why were so many plot holes and questions unaddressed?? What is this ending?! (Fair warning, this will be more rant-like than normal.)

Elisabeth (aka Liesl) is the eldest daughter of formerly famous musical parents who run a small village inn. Her younger sister Kathe is a flirtatious beauty who recently accepted an engagement proposal from Liesl’s longtime friend (and crush) Hans. Liesl’s younger brother Josef is a painfully shy prodigal violinist, undiscovered due to their father’s alcoholic lack of drive to have him tutored in the “big cities”. Feeling the burden of keeping her family together and afloat while being constantly criticized by her father for overvaluing her musical talent, Liesl buries her own composing skills deep in her heart, along with magical yet pointless childhood memories of dancing in the forest with the Goblin King. The Goblin King, however, has not forgotten and sets a trap to lure Liesl to the Underground by kidnapping Kathe to be his Queen, trusting Liesl will do anything to rescue her sister.

This of course all sounds very fascinating, but there were so many plot holes and problematic themes that, despite its potential, I couldn’t look past this book’s flaws.

The first half of this book wasn’t terrible; the writing was lovely and the foreshadowing was pretty good. I loved the musical elements and I was optimistic about the storyline so I tried to overlook the first signs of a flawed narrative (like the distractingly ambiguous timeframe and the constant slut shaming). Even entering the second half of this book, after Liesl finally finds her way to the Underground to rescue Kathe, this second world S. Jae Jones begins to build is mysterious and wintery and full of potential. But then Liesl spends an inordinate amount of time wandering around the Underground tunnels and neglecting her mission to rescue her sister before Kathe dies (no human lasts long in the Underground). The plot progression severely deteriorates and the story in general starts to drag – there was really no recovery after this.

One of my biggest problems with this book was the anti-premarital sex sentiment theme dominating the first half (propelled by the strong Christian beliefs of the villagers), which manifested as an infuriating amount of slut shaming. Kathe is looked down on by the villagers, Hans (her supposedly loving fiance), and even Liesl herself for being outgoing, attention-seeking, and flirty with everyone. Then the second half arrives and, in a complete about-face, focuses entirely on Liesl throwing herself at the Goblin King, obsessed with needing him to “tear her open” and “burn her shame away” through sex (literally wtf is this language). I’m guessing this was Jones’ attempt to create a sexual liberation story (along with some “light” internal questioning of Liesl’s Christian beliefs that led (annoyingly) nowhere conclusive), but there was absolutely no character development to justify Liesl’s sudden change of mind. This hypocritical behavior was infuriating and, compounded with the prior slut shaming of the first half, imparted an incredibly negative impression on me.

Liesl’s INCESSANT harping on how she’s “plain” and “unlovely” throughout this book was obnoxious. I’ll be the first to agree that the typical incredibly beautiful YA heroines are overdone. Maybe S. Jae Jones also hates these tropes. But she took the opposite to an extreme. I thought at least by the end Liesl could have gained some confidence, particularly since this appeared to be a theme for much of the book. But no, on the very last page she calls herself a “queer, unlovely little girl” (435). So…so much for the character growth she had been supposedly undergoing for the ENTIRE book. At the end, she was still entirely impulsive, irrational, overly reactive, immature, selfish, and self-belittling.

This paragraph has to be spoiled entirely for giving away the ending but the complete disregard for the rules of this world were ridiculous and I need to vent. The laws of the Underground that were made abundantly clear in the beginning (a life for life – a Goblin King bride for the continued survival of the world above – the bride cannot leave) were apparently just a convenient requirement for that part of the story. The ending decided to trash these pre-established rules so that Liesl can just up and leave back to the human world. The world didn’t fall into perpetual winter and the changelings weren’t released to terrorize humanity, as had happened when she had tried to escape thirty pages earlier, because this time everything was definitely 100% different. *eye roll*

This ending was horrible and the primary driver for my disappointment. I could have tried to overlook the numerous plot holes (one minute Liesl was dying in the Underground and the next fine and laughing) or the Goblin King’s amorous use of her sister to ensnare her in the Underground (this was disturbing) or discrepancies in the world building (how did Liesl get to the first goblin orgy from her door-less room?) or people acting out-of-character (after months of rejecting Liesl’s attempts to get in his bed, the Goblin King suddenly throws himself at her feet) or the horrible, cringe-worthy sex scenes (this never should have been edited down from Adult to YA). However, the ending was so completely out-of-line from everything that had happened thus far that I cannot even say this was a “great twist ending”. This was a ridiculous ending. And I know there is a sequel. This book showed absolutely zero character development (except on the part of the Goblin King, who 100% deserves a better person to love than this selfish woman-child) and left too many things open-ended with no resolution. Why did Liesl’s goblin handmaiden Twig almost turn into a rock tree? What happened to the original Goblin King and First Queen? Did douchelord Hans and loving, innocent Kathe break off their engagement? Why doesn’t Liesl want Josef to credit her when publishing her music after all her supposed self-discovery? What the HELL is the Goblin King’s real name?!

I am a sap for happy endings and this was not a happy ending. Nor did it answer 85% of my questions. I’ll probably read the sequel because I’m really, truly hoping my frustration about the ending of this book is unfounded and S. Jae Jones is going to resolve every question and plot hole from book one. And perhaps the next book won’t have so much content failure. This was a brilliant idea, it just had really poor execution. I don’t…not recommend it. But I’m so frustrated, I can only suggest you read Wintersong with a very open mind and have the lowest expectations possible.

Book Review: What the Most Successful People Do Before Breakfast – Laura Vanderkam
Next Post: Book Review: Through A Dark Glass – Barb Hendee