Please force your way through Part One, because Part Two+ was so much better. The latter is filled with action-packed scenes and I could not put this down.

Don’t you know that daughters are far more precious and revered than sons? (195) 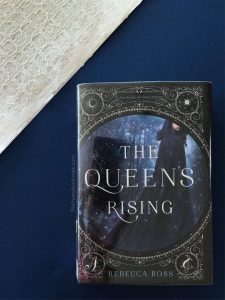 3.5 stars, but this was tough to rate. I enjoyed both the storyline and character development, and The Queen’s Rising even met my 4 star criteria that I will likely reread this at some point. But. I really can’t excuse the struggle that is Part One. The overwhelming use of metaphors and the agonizing, eye-rolling behavior between Brienna and her teacher, Cartier, were rough, which is a shame because the second two-thirds features fantastic character building and an abundance of political schemings and secretive plans leading up to an epic battle, all wrapped up nicely with no loose ends in a solid happy ending. This is going to be a rather lengthy review given Part One and the rest of the book (or as I refer to it, Part Two+) are essentially two different books, but bear with me.

Part One chronicles Brienna’s last-second addition to Magnalia House’s class of girls studying to become “impassioned” (i.e. a master) in either art, music, dramatics, wit, or knowledge. There’s lots of painful-to-read romantic tension between her and her teacher (which she irritatingly denies) and depictions of the friendship / drama between the resident girls that is pretty much irrelevant to Part Two+. The only exciting parts are Brienna’s unexpected visions after picking up certain objects, when she lives bits of history through the eyes of an unknown man. Then Brienna fails the ultimate goal of the school, doesn’t get a patron (post-school mentor), and we finally reach the Much Better Part Two+.

While Brienna’s heritage is unsubtly alluded to throughout Part One (and completely spoiled by the family tree in the beginning of the book), we find out the headmistress of Magnalia House has been harboring a secret regarding Brienna and the barbaric neighboring kingdom of Maevana. Brienna is offered the opportunity to take part in a more important role than passion student by becoming an adopted daughter to Alderic Jourdain, who hopes to use her visions to overthrow the violent and cruel King of Maevana and put the rightful Queen back on the throne.

Part One dragged. There’s really no other way to say it. I couldn’t stop myself from rolling my eyes throughout most of this section (except Brienna’s visions – these were written in a completely different tone that was, in contrast, shockingly straightforward and action-packed). The use of so many dense and occasionally confusing metaphors (comparing voices to smoke in the autumn evening), combined with the use of heavy language and complicated sentence structure, prevented my immersion in this world. I love purple prose done right, and I honestly could only push through by finding the language comical.

“We unanimously loathed [our dresses], with their high collars and long plain sleeves and chaste fit. To shed them soon would feel passionate, indeed.” (28)

“I shook my head, as if to clear the gossamer that had gathered between my thoughts and perceptions, and glanced down at the book in my hands” (68)

“The slow, seductive plucking of Merei’s lute…drew me to the first tent, invited me to part and enter the fluttering white cambric as if I were slipping into a stranger’s bed.” (102)

Beyond the writing style, Part One’s plot was just really, really slow. So much time was spent attempting to develop the agonizingly awkward “romantic tension” between Brienna and her teacher Cartier, and the constant “inner turmoil” Brienna felt was aggravating. She came across as incredibly immature throughout this section, and while this provided a very low baseline for her development in Part Two+, her personality was a lot to deal with for 160 pages.

However. Please force your way through Part One, because Part Two+ was so much better. Brienna’s “visions” in the first half are indicative of the latter action-filled scenes, including smoother language and strong, natural-feeling dialogue. The plot sped up with plenty of suspense and intrigue. I could finally root for Brienna’s love subplot with all the enthusiasm, and Brienna herself drastically improved in likability. Part Two+ was very reminiscent of a classic fantasy novel, and I found myself unable to put the book down.

I loved Brienna’s character development. We met her as a very passive, waffly girl, and over the course of this book we see her find both her self-confidence and life purpose. Ross did an excellent job of not bestowing her with instant skills, bravery, and self-assuredness often given to YA fantasy MCs. Brienna has the appropriate level of self-doubt when thrown into life-threatening situations for a cause she is only just coming to understand and believe in. By the end, she has had a believable amount of growth to take the ultimate step of deciding her fate for herself – no one came to rescue the day or make the decision for her (and Cartier’s vow to follow her regardless was *swoon*).

I’m spoiling this paragraph on The Chosen One trope just in case, but I’m not of the strong opinion that this gives much away. My favorite part of The Queen’s Rising may be that Brienna was not “the Chosen One”. Don’t get me wrong, I have no problem with this trope and most of my favorite books use this. But that she wasn’t the titular character was a pleasant surprise. I guess one could argue that the discovery of her heritage places her as a Chosen One, but I didn’t feel like this was a primary driver to the story, just one of many problems she faced at the end (also, the blurb of this book on Goodreads lends this way too much credit). She also isn’t miraculously skilled at fighting (woah!). The majority of this book is spent with Brienna in full support of the “real Queen” (who was of course overly prepared to be the Chosen One in knowledge of strategy and battle…but she had been training since birth to assume this role), which was a refreshing twist on this traditional fantasy trope.

Ross’s exploration of the meaning of a father-daughter bond gave me all the happy feels (I absolutely loved the importance of daughters in Maevana) and the ending of this book was wonderful and cute and everything I could’ve hoped for. I’m curious how Ross will continue the series as this book was wrapped up so tightly it could be a standalone book, but this was a big plus for my cliffhanger-hating-self. If you can get through Part One, Part Two+ of The Queen’s Rising is well worth the read.