Coupled with my issues with the overall structure, this book’s content was neither my style nor provided information I found useful. I cannot recommend it.

If one of your executives becomes a big jerk dog, you have to send her to the pound. 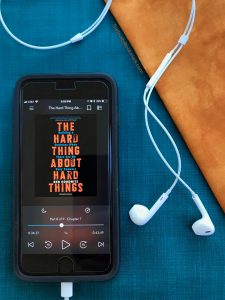 Woof. (Pun intended.) This was nothing like I expected, and not in a particularly good way. The subtitle “Building a Business When There Are No Easy Answers” led me to believe this would be a useful book for a budding entrepreneur, but the term “building” is rather misleading. This covers a great deal of “already very established business” issues in great detail, such as hiring and firing executives, designing an organization’s hierarchy, and conducting layoffs. I probably should’ve DNFd it after the first half, but every now and then a useful little tidbit would pop up and I would keep listening (audiobooks for nonfiction, always). I think essentially this book was neither my style (I mean…serious eye roll at that quote above) nor provided information I found useful. Coupled with my issues with the overall structure, I had to give The Hard Thing About Hard Things with 1 star.

The structure started out well and I was hopeful. Horowitz provided a solid chronological background of his life and business experience through the first three chapters. And the next few chapters did in fact provide advice for entrepreneurs of startup-level companies; bits like his advice to “look for a market of one” and “ignore the thirty guaranteed rejections” were very engaging. But soon after, it became a lost cause. “Advanced business” advice was intermixed with stories from his own career, and the constant timeline jumping (between years and companies) was ridiculously confusing. From there, the structure felt completely abandoned in favor of a rambling stream of consciousness about any business-related topic that came to mind. All-in-all, it was incredibly difficult to find the motivation to finish this book (and I was passively listening to an audiobook…there was very little effort required).

There was a great deal of profanity and casual usage of terms like depression that left a sour taste in my mouth. On top of that, Horowitz came across as a rather aggressive, abrasive person with little regard for how his words and actions might affect those around him. I understand that he’s facing pressures and challenges of running gigantic businesses that I will never understand (particularly during his “war periods”), and he certainly provided examples of when he was thoughtful towards other people (like paying for the medical treatments of the ex-CEO of a company he purchased). However, his approach to other people and evident lack of empathy is just not my style, nor something I enjoyed listening to for an entire audiobook.

Too much of this book was spent in excruciating detail on his own companies and deals rather than providing advice and information transferable or usable by other entrepreneurs. Perhaps with better structure his intentions would have been clearer (e.g. lesson topic, story, reiterate lesson), but for the majority of The Hard Thing About Hard Things, I felt like I was listening to stories with no concept of their relevancy or why I should care. There was also just a level of toxic masculinity (show no weakness, display unrelenting confidence) and aggressiveness displayed in this book that soured most of the messages for me. While some of the advice was useful (his emphasis on hiring for strengths rather than weaknesses), I just didn’t click with this book.