Although a few things could have been tied up better, this was overall an addictive and fast-paced choose-your-own-adventure in a fully immersive setting.

The little laboratory remains as a mere afterthought, its wearied face shrouded by the sallow, emaciated branches of a willow tree. (loc 92) 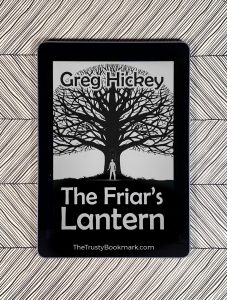 The first Choose-Your-Own-Adventure (CYOA) book I’ve read in well over a decade, The Friar’s Lantern was a fascinating look at the achievements of technology and whether humans have free will (beyond what their brain has already subconsciously decided). A quick page turner, I found this hard to put down in my efforts to “win” the final prize.

As is characteristic of CYOA stories, The Friar’s Lantern is written with you as the MC in present day, but it actually weaves two stories together: (1) You have signed up for a university study where you are presented with two suitcases. In one case is a thousand dollar check, in the other a million; you can choose the one with the million or choose both. However, you undergo an MRI scan that the man in charge of the study declares will predict which decision you will make; if it predicts you will choose both, then the million dollar suitcase will be empty. When you return in a week, you will make your decision. (2) Immediately after joining the study, you find yourself on the jury panel for a murder case. The man on trial shot his wife’s murderer a week after her death when he randomly happened upon the killer in an alley. You must decide if the husband acted as a result of (a) spontaneous passion or (b) a subconscious decision made in his brain at the moment of his wife’s murder a week ago.

I very much enjoyed the fast-paced and addictive qualities of The Friar’s Lantern. This book’s second storyline covering a murder trial is not a typical genre I venture into, but I found myself thoroughly invested in the outcome. While there was a degree of info-dumping when it came to the definitions of voluntary manslaughter vs. murder (repeated a number of times, as will happen in a true trial), the author has clearly done his research on this subject and I found it informative for making my CYOA decisions.

I am a big fan of descriptive settings, so I personally loved this book’s description heavy sections (although some people may balk at their length). I loved the settings for both the university laboratory and the courtroom “pod”, and the detail with which the author described the people and places around my character were very effective in placing me within the scene.

While the story was engaging and fast-paced, I had some difficulty tying the two primary storylines together over the course of The Friar’s Lantern. I assume overarching theme(s) from both were meant to intertwine and feed each other, but there was a lack of clarity on this front. In particular, specific and seemingly important scenes likely held a deeper meaning than their face value (e.g. the preacher in the park declaring God has predestined us to heaven or hell). These scenes would then end without a clear statement of their importance to the story, primary themes, or internal development of my character.

It was therefore somewhat difficult to place myself in the main character’s shoes (a relatively serious drawback in a CYOA story). My motivations for joining the university study in the first place were never explained, and I wasn’t sure what I was supposed to be “learning” over the course of the book (per the theme). The current tense writing style helped a bit in forcing me into the MC’s head, but I still struggled a bit with this.

That being said, overall I found The Friar’s Lantern to be a fast-paced read where each scene’s fully immersive and descriptive setting made this a difficult book to put down. There were a few things that weren’t tied up as cleanly as I would have liked, but all-in-all an enjoyable quick read for those who like both CYOA books and crime stories a la Law & Order. (Also, I won the $1mil!)

Disclosure: I received a free copy of this book from the author (thank you, Mr. Hickey!). This does not affect my opinion or review.