This was clearly an “intro” book with only one major event, but overall a satisfyingly good story and start to a series I’ve been eagerly waiting for.

As the last of him faded in the dark up the road beyond the town, Mari slipped silently out of the shack to follow. Her hand grew sweaty inside her glove where her grip tightened on the narrow-bladed dagger. (21) 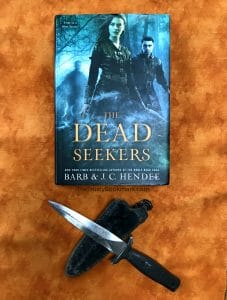 I absolutely loved the Hendees’ Noble Dead Saga (you can find the first book here!), and The Dead Seekers is a great start to another series that I cannot wait to obsessively follow. It falls under the paranormal fantasy genre, involving dead spirits, alchemists, and shape shifters, and is placed in the same world as Hendees’ previous series, so it’s probably safe to assume that vampires, elves, dwarves, and their like may eventually make an appearance.

This book’s POV is split between its two main characters, Mari and Tris, whose paths have unknowingly overlapped for over a decade. Mari’s entire family was slaughtered by ghosts when she was ten, and she has been hunting for the murderer who directed the spirits ever since. Tris is escaping his own past experiences by hunting spirits lingering among the living and banishing them back to the dead. Hearing of Tris’s work controlling the dead, Mari is convinced her search has finally come to an end but begins to lose confidence after unexpectedly joining his quest.

I loved that Hendee revealed an almost complete history of the main characters throughout the novel (literally back to Tris’s birth); it really helped fuel events as Tris and Mari began to discover their connected past. Their shared background also created the perfect roadblock to a straightforward love story that they’ll have to overcome if Hendee builds this relationship in the next book (yay for no instalove!). Mari, in particular, spent far too much of the book questioning Tris’s involvement in her parents’ death to fall in love. It’s just as possible that both begin a love story with a new character not yet introduced, which creates the perfect amount of suspense for the later books.

The dual POV was somewhat of a drawback at times to the story. I typically love reading from multiple character’s perspectives, and for most of this book it was fascinating to see both Mari and Tris’s viewpoints. However, Mari’s obsessive internal debate over whether Tris was her “Dead’s Man” throughout the entire book made her POV tedious to hear by the halfway mark. The alternative scenario (where Mari instantly trusted Tris) would not have been in line with her previously established character, but even a slight progress in her mindset would have been better to read than her constant half-convinced, half-questioning thought process.

This is placed in the same world as the Noble Dead Saga and having devoured all fourteen books in that series, I went into this book with a very solid understanding of the setting ahead of time. I’m therefore probably biased, but overall I felt the world was very thoroughly constructed, both in its rural and urban settings. Hendee doesn’t utilize unnatural info dumping when setting the scene and quite a lot is actually built through the characters’ interactions with their surroundings, which helps to create this incredibly rich and believable environment. I feel like anyone with experience reading books set in fantasy worlds, from tiny villages to fully guarded cities, will easily immerse themselves in this book.

Overall, I definitely recommend The Dead Seekers and I cannot wait for the next one. It was a solid build to the beginning of a series, and left both the love line and general direction of the story open-ended which is great for suspense. I’m also selfishly hoping for interactions with characters from the Noble Dead Saga. There are some flaws and it is clear this is the first novel of a few as there was only one major event / accomplishment, but overall a satisfyingly good book from these authors and the start of a series I am incredibly excited about.