I’m just a big fan of a book where tea plays a supporting role in 50% of the scenes. This was an excellent and laugh-out-loud funny sequel to Clean Sweep.

Caldenia smiled. “A Quillonian chef. My dear, you shouldn’t have. Does he have moral scruples? I am reasonably sure this summit will result in at least one murder, and I have never tasted otrokar.” (63) 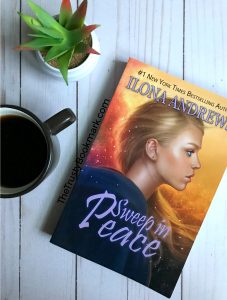 I am a big fan of this book. Andrews has continued a unique storyline, with some significant improvements from the first book (review here). I give this a solid 4.5 stars; I wanted to give it 5, but there were a few flaws I’ll address that stopped me from giving it a full “everyone NEEDS to read it” rating. In quick summary, Dina has accepted an offer to host a peace summit between warring factions on the planet Nexus. We see the vampire Arland return, along with Nuan Cee’s Merchant family, and a new, appropriately named Hope-Crushing Horde of otrokars. With everyone more intent on killing each other than negotiating, Dina must assist the Arbitrators in brokering a peace treaty.

This book made me frequently laugh out loud. Caldenia returns as one of my favorite characters, but I’ll now add Orro to my list, Dina’s newly hired, incredibly talented chef with highly volatile emotions. His flowery speeches and loud lamentings about what a challenge life is were highlights of this book, and his final scene left me a little teary-eyed with happiness. To be honest, I tear up at a lot of cute things, but that scene was wonderful.

“Very well. Like a primitive savage who sets out to tame the wilderness armed with nothing but a knife and his indomitable will, I will persevere!” (Orro, 62)

Dina is still fiery and loveable as well. There’s a bit of pining for Sean that seemed a little much given how they left things, but overall she’s still fiercely independent and refuses to cave to Arland’s advances.

I had a problem with world building in the last book and this sequel was a drastic improvement, or perhaps I was paying more attention given my judgement of the last. Regardless, the worlds and people came to life far better this time. Andrews did do some significant info-dumping when building scenes, particularly when Dina constructed the Inn’s ballroom and returned to Baha-char. It wasn’t poorly done, though, as it created concrete visuals of the settings and various new species. Andrews also used a great blend of humor and description, e.g. “colorful banners of the Hope-Crushing Horde” (31), which thankfully helped keep the story more lighthearted given the war theme.

The climax scenes were significantly better this time as well. Build-up to suspenseful parts actually occurred, and the two final twists, Sean’s role with the Merchants on Nexus and the identity of Dina’s poisoner, were SO GOOD. Everything matters in this book. Andrews does an excellent job of hiding pivotal clues that only become evident after the twist occurs, although this made me scrutinize every scene as I read.

On that note, I am not a fan of mysteries left open-ended and this book had quite a few that were only evident because I was reading so much into each scene. The prologue describes Dina’s brother recruiting the Arbitrator George, but George never reveals this. She warns Sophie of Caldenia’s skills of manipulation but this never plays a role (and Sophie’s past name as Lark should have some significance but never comes up again). Dina spends a full page describing her new cat, how “there was something witchy about him…hinting at a hidden mystery” (162), to no importance. And finally, Dina wonders where she’s seen George and his brother Jack before, but she never figures it out. Because these weren’t resolved this time around, I’ll again spend too much time trying to figure them out while reading book three.

Finally, the motivations for some characters were somewhat forced upon the reader. I’ll lead by saying that I easily empathize with book characters, villains and heroines both, so it wasn’t impossible for me to empathize with Lord Robart and Nuan Cee when their motivations for the war were revealed. However, it would have been easier had their storylines been developed slightly earlier in the book, i.e. Lord Robar’s vengeance for his lost love and the colonization of Nexus with shunned Merchant children. The latter in particular was a wonderful idea, but nothing prior had hinted at the importance of lineage to their society. I understand the value of big reveals, but these were too abrupt to instigate genuine feelings of empathy for their respective situations without feeling forced.

Overall, Sweep in Peace was a great sequel to Clean Sweep and showed some specific improvements. The final climax scene and message gave me all the sentimental feels, and the humor Andrews wove throughout these books has created a very entertaining series. I’m also just a big fan of a book where tea plays a supporting role in 50% of the scenes. Everyone, no matter the species, enjoys tea in this world. Like Dina says in the first few pages, “I needed tea. Tea would make everything better.” (3)