I see why others have given it 5 Stars and I definitely recommend it (and I might even read the sequel because I’m a sucker for plot-driven books).

I rolled my eyes. Leave it to Uncle Jonathan to worry about prostitution being too much for my feminine persuasion, yet think nothing of me seeing a body spliced open before I’d even had my luncheon. 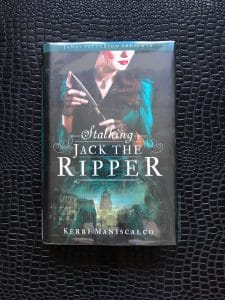 4 stars, but let me explain. The book itself was technically skilled, the writing fantastic, the plot rapid and engrossing, the main character great and her love interest fascinating, and I could not put this book down. That being said, this genre bordering horror/thriller is not my jam. It worked okay when it was bright sunshine-y daylight out, but I finished this up around 11pm and couldn’t sleep. I guess if I had bothered to read the blurb on Goodreads, I would’ve known it was a “creepy horror novel”, but I try to avoid those for fear of spoilers. Thus I had to dock Stalking Jack the Ripper a star, strictly due to personal preference and my inability to handle thrillers, but I see why others have given it 5 and I definitely recommend it (and I might even read the sequel because I’m a sucker for plot-driven books).

Audrey Rose is the daughter of a relatively high class family in England. Upon her mother’s untimely death, she becomes intent on learning more about the human body through a secret apprenticeship with her uncle, the renowned forensic scientist Dr. Jonathan Wadsworth. His laboratory is soon tasked with investigating the bodies of the victims targeted by the newest villain of England, Jack the Ripper (duhn duhn duhnnn).

I loved Audrey as the MC. Her personality and insistence that she could and would do anything she wanted was fantastic. Completely out of character for the period, but I loved the idea of modern women empowerment set in old English times. She was a little annoyingly irresponsible at times in her attempts to hunt down the killer, but this behavior wasn’t inconsistent with her character (and I was probably most annoyed because it was freaking me out as she realized how dangerous lurking in a foggy alley at midnight might be – I need my heroines fearless for my own peace of mind).

Regarding the romance: I wish I hadn’t spent the entire book convinced Thomas was Jack the Ripper. I loved his character and his attitude, but the blurb on the back cover of the physical book was too influential (“I was the girl who loved The Ripper”). It was hard to root for their relationship when I spent the entire time convinced he was going to slice open her throat. I can still appreciate parts of their subplot though, and I loved their back-and-forth.

I glared so hard I feared my face would get stuck that way. “If you ever try anything like that again, I will stab you in the foot, Thomas Cresswell.”

I flew through this book in an afternoon. It was extremely fast-paced and well-written. The characters and events were quick and intriguing with bits of humor thrown in. I had narrowed the villain down to two people pretty soon into the book, so I wasn’t entirely surprised by the ending, but the villain’s motive was shocking and appropriately consistent with their character.

I have no regrets reading this (I say as I write my review after a sufficient amount of time has passed that I have forgotten the aftermath paranoia, safely back in my bubble of unicorns and happy endings). I’m not one for blood or gore or semi-realistic stalker scenes so this is a rating based purely on my own tastes, but reflective of how good I found the writing. For those who love this genre, Stalking Jack the Ripper is a must-read.