Every action scene was vicious, violent, and everything you could want in a Viking story. And I do love a good romance! But there was just so. much. crying.

Sky in the Deep by Adrienne Young
Rating: 3 Stars 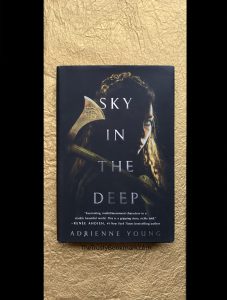 This was a tough one to rate.  The action scenes were thrilling and intense and I do love a good romance.  But the crying. There was just so. much. crying. I went with three stars because I really couldn’t put it down, but don’t expect a lot of complexity going into Sky in the Deep.

Eelyn has spent her entire life training and fighting in the neverending blood feud between her clan and their rivals, the Riki.  But during the most recent battle she sees the impossible: her brother she left dead on the battlefield a fighting season earlier…fighting alongside the enemy.  Chasing after him, she is taken down and captured by her brother’s new fighting partner, Fiske, and dragged back to their Riki village to wait out the winter storms.

The blurb on Goodreads gives pretty much the entire plot away, but this book was completely predictable on its own.  From the plot to the love story to the final ending, every step was generally expected without significant twists. Occasionally, though, I’m in the mood for an easy-to-read fantasy without a lot of thinking involved – for that, this was perfect.

The visual detail of the action scenes was excellent, from the opening scene as Eelyn hacks into her first opponent to the murderous pillaging by the Herja, a legendary clan not seen in ages.  Most fantasy seems to gloss over battle scenes, leaving the enemies as ambiguous “bad” characters. Young, however, takes the time to describe Eelyn’s first Riki victim down to the furs wrapped around his neck, which I thought was an excellent way of conveying that they weren’t just random people for Eelyn to kill and prove her battle worthiness.

My primary complaint is the reduction of Eelyn’s originally ferocious character into a crying mess for two-thirds of this book.  I appreciate her authentic reaction to having her entire world turned upside down through the betrayal of her brother and the realization that perhaps the people she had been trained to hate since birth were not actually that different from herself.  She was not instantly okay with the state of things, which was good. However, the first half was a little disappointing in how much time she spent in confusion and self-pity — I wanted her to be stronger and more involved.

I loved very specific scenes (like Eelyn preparing Harland to fight the Herja) and every action scene was vicious and violent and everything one could want in a Viking story.  While Eelyn’s emotional struggle was authentic, it was dragged out for far too long and with way too much crying. Despite this, though, I could not put Sky in the Deep down (I’m a sucker for hate-to-love tropes…even if Fiske didn’t talk much). Thus, 3 stars because I enjoyed it, but it leans towards 2.

5 Reasons to Love Your Local Library
Next Post: 9 Focus Tips & Tricks for Writers