For a thrilling read with fully developed, love-ably “evil” characters, Six of Crows is a book I recommend to anyone and everyone who loves fantasy novels.

“A good time needn’t involve wine and…and flesh,” Matthias sputtered.
Nina batted her glossy lashes at him. “You wouldn’t know a good time if it sidled up to you and stuck a lollipop in your mouth.” (125) 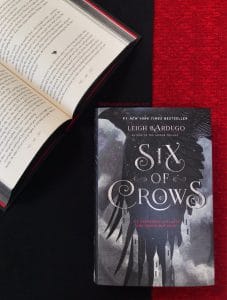 I know I’m ridiculously late to this party, but I need to add my adoration to the records. I honestly recommend Six of Crows to anyone. Each of the six main characters are incredibly well developed, the plot exciting and action-packed, and for a lengthier book covering essentially a single heist, I never once thought “huh…this is taking a while”. This was easily 5 stars and one of my new favorite books.

Kaz is second-in-command for a bottom-status gang in the slums of Ketterdam, the Dregs. When offered the opportunity to make an inconceivable amount of money for a single mission, he throws together a ragtag crew of 5 additional slum inhabitants of various violent and nefarious backgrounds. Each with his or her own agenda, Kaz, Inej, Matthias, Nina, Jesper, and Wylan risk whatever they have left for one incredibly dangerous heist…

I loved these characters. Bardugo created six full-fledged humans, with whom (although extremely flawed and objectively the villains in normal society) the reader can easily empathize with. Kaz is frustrating, closed off, and bordering psychotic. Wylan and Jesper go through the best character arcs, both individually and together. Inej’s discovery of her life purpose and Kaz’s description of her glow and drive was both authentic and relatable. The two love subplots discussed below were perfection and revealed even more about each of the people involved. Overall, the development of these characters was perfectly executed.

Kaz and Inej’s love story was a great counter to that of Nina and Matthias. The former was simmering and in secret from even themselves, until the most perfect ending (and one I definitely didn’t see coming). The love between Nina and Matthias was so FANTASTICALLY delicious. I ADORED the message that people can move past trained prejudices by finding love and empathy for the other person. Matthias’s internal struggle to balance his learned hatred for the Grisha and his affection for Nina was incredibly well-developed. I could feel his pain as well as her own internal struggles relating to her and Matthias’s history. The slow reveal of their past and the even slower development of their future was perfectly balanced. I could not be more obsessed with them.

Each character was explored through an incredible six-person POV. I find many authors struggle to use even two different POVs successfully, but each character had a clearly developed personality and world perspective, such that, if you hadn’t seen the chapter heading, you would still know in whose head you were currently residing. Most importantly to its success, the POV moved chronologically; the same scene wasn’t played over and over again from various perspectives.

I love Bardugo’s writing style. I haven’t read any of her previous works, so I was unprepared for how completely immersive her books are. The dialogue was natural and oftentimes awkwardly-laughing-out-loud-in-public-places funny (and each character had their own signature style of speaking). The frequent mid-chapter flashbacks were well timed to teach the reader (without awkward info-dumping) about Nina and Mathias’s background, Kaz’s history and life events, and further development of each character. The world building felt completely natural, building vivid worlds of both the slums of the Barrel, the West / East Stave, and even the ice castle so well that each scene played like a video in my imagination. The inclusion of modern guns threw me for a little bit of a loop, as typically this “fantasy period” would include swords and horse-drawn wagons rather than modern gunpowder and the military tanks of the ice castle. This wasn’t something I couldn’t balance out, but it was a bit of a twist from what I would picture as a “standard” fantasy world.

If I did not already have Crooked Kingdom on hand, the cliffhanger ending of this book would have driven me insane. This book does not cover a great deal of time (it is essentially one gigantic heist over a rather lengthy book), but it never felt like it was dragging or lacking in action. The development of the characters over the course of the book both in introduction to the reader and their individual character arcs was incredibly well done. For a thrilling read with lovably “evil” characters, Six of Crows is a book I would recommend to anyone and everyone.