With a visually stunning setting (full of craggy cliffs and vicious, magical island horses) and a sweet love story, this was a really enjoyable book.

There is nothing faster than a capall uisce. Period. I don’t care what sort of training regimen you’re doing, circles in the surf, or whatever. They have strength on your mare, they have height on her, and your mare runs on grass. The capaill uisce run on blood, Kate Connolly. You don’t stand a chance. (loc. 1788) 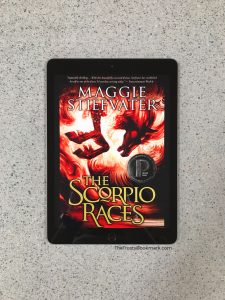 I’m reading the quotes I previously highlighted for this book and I cannot wait to start a reread. Although Scorpio Races really only covered eleven days, there was more than enough plot and character development in that time period to fill these pages. With a visually stunning setting (full of craggy cliffs and sandy beaches and vicious, magical island horses – the capaill uisce) and a perfectly steady, wonderful love story, I really enjoyed this book.

Scorpio Races chronicles the build-up to that year’s Scorpio Races from the perspective of our two MCs, Puck and Sean. Puck, recently orphaned, is entering the race on her beloved pony (going up against vicious capaill uisce, who are constantly trying to murder each other, nevermind a “tasty” normal horse) in an effort to win the pot to pay off the mortgage of her family’s home, lest they be evicted. Sean is the previous year’s winner and doesn’t want the money but a secondary bet he placed with his employer who owns and controls his beloved and somewhat-domesticated capaill uisce.

The beginning of Scorpio Races was slow going. Having just read Enchantment of Ravens, this purple prose was harder to sink into (perhaps because it had come so easy to EoR), and I found myself skipping some of the lengthier descriptions that made the set-up feel like an eternity. After Puck finally registers for the Race though, the plot rapidly picks up. We see brutal horse fight beach scenes, witness the eery initiation for race participants, and learn more about the magical and murderous traits of the capaill uisce (having avoided reviews prior to picking this up, I was confused for most of the beginning regarding these “horses”). Getting through the description-heavy beginning is worth the effort and my attention was held through the end.

Puck isn’t really loveable right away and I spent most of the beginning aggravated with her. She’s short-tempered, self-conscious, and reads rather immature, and I honestly have no idea what age she was supposed to be (maybe late teens?). But as she recently lost her parents and was trying to assume the homemaker role with two very emotionally unique brothers during a rough time, I understand why Stiefvater wrote her as she did. Puck thankfully grew on me as the book progressed, rooting for her as she began to discover herself and her place on her beloved, brutal island. Her increasingly sarcastic, cynical, and bitter humor towards everyone was a great personality trait.

I love how straightforward this love story is. There’s no pretending or bullsh*t or obvious-to-the-reader twists that cause conflict; this was simply a solid, well-paced development of affection. I get sick of the miscommunication trope and it’s wonderful to read a love story that’s straightforward and happy. There was no animosity, just supportive training between them, and this positive continuous build throughout the story was perfect.

The ending was both fantastic (so much emotion; any book that can make me feel enough to cry gets an extra star) and…somewhat confusing. It was a rather abrupt, with some unexpected outcomes that felt very sudden and convenient, with little logical pre-development. However, I really enjoyed Scorpio Races. I loved the setting and the plotlines and the love story, and I will definitely reread this soon.