I can’t think of any other way to describe Saga except as “strange yet fascinating”. I read this in a single session and I’m itching to pick up the next.

You know, for a pacifist, you sure beg to get stabbed a lot. 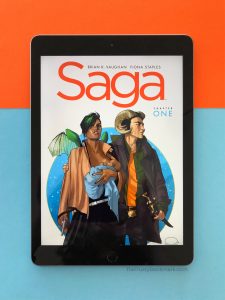 Having read this immediately after Nimona, I was not wholly prepared for the drastic switch from YA to 100% adult graphic novel. I can’t think of any other way to describe Saga except as “strange yet fascinating”. Both the dialogue and art was blunt, brash, and in-your-face, which fit the storyline perfectly, and I never knew what to expect when turning the page. I read this in a single session and I’m itching to pick up the next.

Saga, Vol. 1 tells…well the “saga” (plus a few side character subplots) of a husband and wife on opposing sides of a vicious war who have deserted their positions in an attempt to protect their newborn crossbreed baby girl from the violent world they’ve brought her into. Of course neither side of the war was happy to hear of this news and chaos ensues.

I really grew to care about the characters. Each one, “good” and “bad” was given a backstory (often left for the reader to interpret) and a fully developed personality. And no one was really distinctly…good or bad? Although Prince Robot IV honestly believed himself to be above the armed masses he directs on his side of the war (obviously morally wrong), he was also incredibly excited to start a family (almost cute…but we’ll see how that plays out). And I LOVED how the freelance mercenaries were not one-dimensional “I’m a bad person and I kill people”; they have romantic relationships, cared for the people they had a connection with, and occasionally did the morally right thing when the time called for it.

The art for this graphic novel was incredible. Slightly rough but very detailed, you can tell explicitly how a character felt by their dynamically drawn facial expression. I also loved how the dialogue font varied by character based on who or what they were (e.g. Izabel’s red font, TV-headed robot’s 80’s computer font). For the artwork alone this novel is worth looking over.

The dialogue was very realistic, on par with how we talk every day. Izabel frequently used the word “dude” and the back-and-forth sass between the father and mother referenced present day things like traffic jams (though obviously referencing sci fi spaceship jams). It took me a bit to wrap my head around this style at the start of this novel, but it became more natural as this remained consistent throughout. Moreover, absolutely nothing in this book was glossed over. It handles topics both humorous (angst of alcohol being banned during pregnancy) and heavy (war and child prostitution).

I went with 4 stars (keep in mind for my rankings that’s: “Really Liked. Would Read Again”) because I’m still mildly flummoxed by what I just read. It was fascinating! And funny! And had gorgeous artwork! And I will definitely continue the series. But I’ve just never read this sort of thing before, and I think it’ll take another volume or two for me to be completely obsessed as others are. I do however recommend Saga, Vol. 1 to anyone looking for a bizarre yet engrossing read.