Ready Player One will be one of my go-to “sci-fi books to reread”. A genuinely good story with fantastic worlds narrated by an extremely entertaining MC.

A lot of gunters questioned if [Art3mis] was really female, but I wasn’t one of them. Probably because I couldn’t bear the idea that the girl with whom I was virtually smitten might actually be some middle-aged dude named Chuck, with black hair and male-pattern baldness. (35) 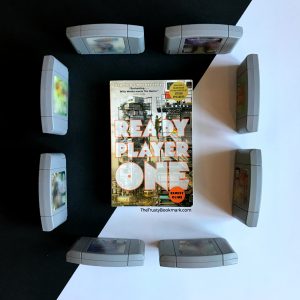 This was an addictively entertaining read. Although I’m sure with the movie out people know the general storyline already, Ready Player One is set in a future dystopian Earth, where the state of the environment is so horrid, the population so high, and the wealth so unevenly distributed that most of the world lives inside the fully immersive virtual reality video game world of OASIS to escape the misery of everyday life. We follow our MC, Wade, a trailer park kid who acquired an OASIS console through his school enrollment (they even do public education through the game), in his obsessive mission to discover a massive inheritance buried in the video game by its creator, Halliday, and promised to the first discoverer of its whereabouts.

The world building in this book was phenomenal. Even though this is 100% science fiction and thus travel in the OASIS is between bizarrely unusual and unique planets, each of the many showcased worlds felt naturally built into the story. Of course it was also easy for Cline to occasionally info-dump as Wade arrived at each new place without breaking the flow of events. But Cline incorporated a number of aspects of the setting into the plot, such as the haptic suits used by each gamer, in such a way that the reader naturally came to understand their use and purposes without things being outright explained. The frequent inclusion of these items in the plot was also an excellent, natural way to remind the reader that Wade was living in a game and not reality.

I wouldn’t say I know a great deal about the 80s (being a 90s child), but I still managed to get 65% of the references. Devoting three entire pages of the book to describing all of the 80s “stuff” (movie references, song lyrics, obscure people, etc.) Wade studied for the purpose of his mission was probably a tad overdone (I may have started to skim by the middle of the second page). However, it wasn’t out of character nor did it detract from the rest of the book; it felt more like a showcase of the author’s love and studious dedication to this decade. Overall, though, I don’t think being unfamiliar with the 80s would stop anyone from enjoying this book – the story still works well without catching every hidden nugget.

The use of first person in this book was fantastic. This writing method can be hit or miss for me, but I loved Wade’s personality, which clearly came through in this style. His side comments (e.g. my initial quote and the one below) kept me snickering throughout the book.

Each enemy I vanquished dropped coins I could later use to purchase armor, weapons, and potions from one of the bearded wise men scattered throughout each level. (These “wise men” apparently thought setting up a small shop in the middle of a monster-infested dungeon was a fine idea.) (256)

I had an occasional issue measuring the passage of time in this book, which threw a wrench in the story’s flow for me. It was difficult to determine how much time was passing while in the video game or even how long he had spent decoding a single step of the mission, to the point where I wasn’t sure how many days, months, or years had gone by in the course of this book. I suppose this could have been part of Cline’s goal, that immersing yourself in OASIS makes you lose track of reality, but then Wade would mention he was taking a food or bathroom break from the game and I would be completely thrown for how much time had elapsed for this part inside the game.

I have a much larger problem with the love stories of this book. It felt like they were thrown in last minute as a “necessary” feature for a “successful book”, but not something the author was either invested in nor did much research on. Although Wade was clear from the beginning regarding his gigantic crush on Art3mis (I loved how their subplot started out based on his infatuation with her blog – yay, liking women for their brains!), the instalove reared up strong and fast as soon as they met. Immediately after, all their time in the game was spent together comparing every tidbit they knew about the inheritance mission (despite Art3mis’s initial refusal to discuss her knowledge mere paragraphs before the instalove outbreak). Wade’s mild obsession bloomed into full force infatuation and all his subsequent decisions were based solely on Art3mis to a nauseating degree that just dragged on and on.

The other love story in this book, the OASIS game creator Halliday’s obsessive love for his best friend’s wife, Kira, was never really something for which I was able to empathize. There was very little time spent building this subplot beyond a short scene and a statement that “he loved her”, and Halliday’s words to and actions regarding his best friend and Kira were extremely contradictory. Overall, both these subplots felt highly underdeveloped and more like a half-hearted attempt to include a love story concept rather than something intentional and useful to the plot.

For the inclusion of the two poorly developed love subplots, I had to dock this book a star. However, Ready Player One is definitely worth reading and will be one of my go-to “sci fi books to reread”. I finished this book in two days, despite being ridiculously nauseous from a concussion, so there’s something to be said for how addictive this book was to read. I highly recommend this, obviously for anyone who loves or appreciates the 80s, but also just as a genuinely great sci fi book with fantastic worlds narrated by an extremely entertaining main character.