One Click provided a decent summary of Bezos’s background and Amazon’s creation, but there were too many significant issues with the book’s tone and format.

We used to joke that the ideal Amazon site would not show a search box, navigation links, or lists of things you could buy. Instead, it would just display a giant picture of one book, the next book you want to buy. 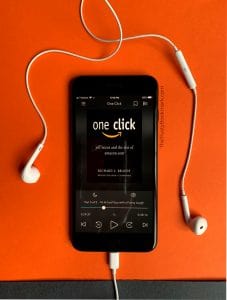 2.5 stars. One Click blends a biography of Jeff Bezos with a business history of Amazon. For a site I use to purchase anything and everything, I knew little how the company started, much less how it became the behemoth it is today. I was even unaware Amazon started out exclusively as an online bookstore (yay books!). One Click provided a decent summary of Bezos’s background, Amazon’s creation, and the opportunities Bezos took advantage of for company advancement. However, I felt there were issues with this book’s tone and format.

Obviously as someone obsessed with books, I was thrilled to hear Amazon started as a bookstore. Brandt provides some interesting statistics around Amazon’s rise to power in the bookselling world and ramifications resulting from their control in the market (e.g. consequences from their pressure on publishers to drop costs and revenue losses for big chain bookstores like Barnes and Noble). I was somewhat reassured by his declaration that small, independent bookstores weren’t being crushed by Amazon, having already learnt to weather the change in demand after retailers like Walmart and B&N broke into the book business.

My primary issue with One Click was its format. The structure was incredibly ambiguous with a timeline that was all over the place. Each time a new event was introduced, I was at a complete loss for when in Amazon’s history it belonged. One chapter described the entire ordeal of Bezos’s “one click” patent, while the next jumped back in time for an entirely unrelated event, followed up by a chapter presenting a (chronological) run-through of Amazon’s development (which included repeat information from the previous two chapters!). If not in an audiobook format, perhaps I could’ve flipped back to find relevant years and dates, but a book shouldn’t waste your time like that.

A smaller pet peeve was this book’s tone of voice. The very first chapter began by pointing out flaws in Bezos’s character, establishing a negative slant for the rest of the book. Even when Brandt stated something positive about the company or Bezos’s strategies later on, I constantly felt like I was waiting for the other shoe to drop. The author certainly remained consistent, but I would have prefered something more neutral (if not positive). This just personally wasn’t a style I was looking for.

Overall, I found the subject matter interesting, thus the extra half a star, but the flaws of this specific book left me disappointed. As a (relatively) brief summary of Bezos’s life and Amazon’s evolution, One Click worked, but I would find a different book for more detail (with a less frustrating content structure).