This was a silly, fantastic, linguistically clever book in a completely unique writing style. One of my go-to rereads and I cannot wait for the sequel.

“Jane!” G called out in a loud whisper. As G’s eyes adjusted to the scene before him, he saw Edward raise a . . . fire poker? . . . and Jane pull out . . . a frying pan? Whose cockamamie idea were these weapons? Probably Jane’s. They seemed like Jane’s idea of weapons. (458) 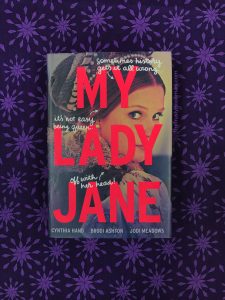 This was a silly, fantastic, linguistically clever book and I cannot wait to read the sequel. The constant play on words (particularly with equestrian undertones), sneakily repetitive use of phrases across chapters, and allusions to other famous works kept my constant attention. There was just the right amount of current jargon thrown in for laughs and a reminder that this wasn’t an exact retelling of Lady Jane. I was also fully onboard with this Strong Independent Women theme, particularly when contrasted with the typical sexism of that era. My Lady Jane was utterly unique and I highly recommend it.

In the time of Eðians (shapeshifters) vs. Verities (non-magical folks) (e.g. a fantasy version of the time of Protestants vs. Catholics), young King Edward is dying and must choose his successor. His cousin Jane is the unfortunate recipient of the throne, along with a new engagement to Edward’s advisor’s son Gifford (otherwise known as G) to secure the line of succession. Unfortunately, and unbeknownst to Jane, G is an Eðian and becomes a horse at daybreak. This unconventional first event is only the first in a book filled with drama, political deals, back stabbings, and magical ordeals, all tossed together with a giant helping of humor.

This writing style was unlike anything I’ve read before. The authors inserted random and often humorous narration into the story as a sort of “aside” that either added suspense or filled in potential plot holes. For example, they pointed out that “perhaps the reader would wonder where Jane got rope to tie up prisoners” (and then provided an answer), and informed us that they may still kill off all our favorite characters at periodic intervals throughout the story (but not Pet the dog, because “as narrators we obviously wouldn’t kill a dog”). This style of friendly familiarity not only occurs in these narrated injections but runs throughout the book as well. As the POV rotates between Edward, Jane, and G, each MC reveals their thoughts like a friend telling you a story. This sense of realness was engaging and addictive to read.

She’d been presented to him as the intended of Francis, the dauphin (which Edward kept thinking sounded like the word dolphin, which seemed an odd term for a prince). (403)

I’m such a sucker for love stories and these were very well done. The build of unexpected, affectionate feelings was authentic and genuine. G’s discovery and recognition of Jane’s strong-willed nature, independent streak, and “right-is-right” attitude was adorable and wonderful. I was mildly concerned a dreaded love triangle would form between our three MCs, but that was quickly squashed with the arrival of more important characters (and the topic well-handled in G and Edward’s subsequent discussion).

These three authors taking depressing bits of history and rewriting them as fantasy themed novels with strong, independent women is my perfect retelling. The humor in this book was fantastic. Everything from the detailed description of clothing (“gold-embroidered pumpkin pants”) to individual bits of dialogue added to the wit of My Lady Jane. This adorable story will be one of my go-to rereads when I need something clever, cute, and funny. I cannot wait to read the next book in this series.

“He seems all right,” Edward observed as they watched the boy grab a handful of sweets from a passing tray and stuff them into his mouth. Then the crown prince picked his nose, and ate that, too. “Oh. That’s unfortunate.” (415)