For a very entertaining read of honest breakup advice and juicy details on Andi’s experience with the Bachelor franchise, It’s Not Okay was a great book.

Self-help books say drinking your sorrows doesn’t work, and that’s probably true, but right now I don’t give a damn. 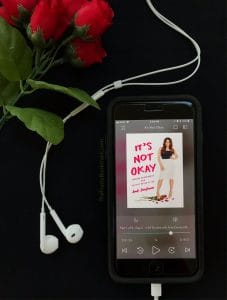 From that quote, you get the spirit of this book. 3.5 stars, rounded up to 4. It’s Not Okay was a clever and hilarious memoir / breakup advice combo book. I frequently found myself laughing out loud and demanding my sister (also a Bachelor fan) immediately download the audiobook (particularly when Andi went into hysterically explicit details on her time with Nick Viall). Her audiobook voice style is more of a “chatting with a friend” vibe than your standard narration, and she came across as both witty and smart. I highly recommend this to any Bachelor franchise fan as well as anyone who wants straightforward and honest advice about dealing with a breakup.

Andi weaves a candid discussion of her experiences on the show and the rise and demise of her relationship with Josh Murray into the sequential steps of her breakup recovery chronicle / advice. She is brutally honest about how difficult the aftermath of a breakup is, passing on the typical “just be positive!” advice in favor of her “totally okay recovery process”, which spanned not showering and drinking to getting your sh*t together (in a practical timeframe). Granted she has more leeway than the rest of us, hiding in her friend’s guest room without responsibilities, but her personal testimony was very relatable.

I unapologetically and unashamedly love the Bachelor franchise, so this was a fascinating look at the recruitment process, operations behind the camera, and the emotional ordeal Andi experienced on her season. I love how she never explicitly named any guys or named the show (trademarking issues perhaps?), but even for someone who didn’t follow her season religiously, you wouldn’t have to know contestants to understand her points.

This book did take a more serious note when the reader started to realize her engagement with Josh was emotional abuse. She’s very practical about how battered women realize they don’t think they deserve better because they’re not who they used to be before their abuser wore down their sense of self-worth and who they were. Andi handled the serious tones of this book well.

Certain aspects of this book felt forced at times. Her shopping metaphors were a little over the top, as if she were trying too hard to identify with the “masses”. She also included a lot of “f*ckings” when listing the famous interviewers she would be meeting post-Bachelorette, and while her excitement was understandable, the aggressiveness was jarring.

For a very entertaining read of honest breakup advice and juicy details on Andi’s experience with the Bachelor franchise, It’s Not Okay was a great book. The majority of this audiobook had me grinning like an idiot in my car; her declaration “At age 40, my vagina falls off” had me nearly in tears. I adore the Bachelor franchise so I was pretty excited to read this and it did not disappoint.