I adored this book. The writing was gorgeous and descriptive and woven in with humorous lines in such a beautiful style that I could not read fast enough.

[The dress] gathered beneath the bosom and had a questionable number of ribbons for sleeping in, unless perhaps one used a hammock and needed to be tied down during high winds. (178)

An Enchantment of Ravens by Margaret Rogerson
Rating: 5 Stars 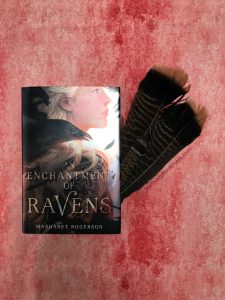 I adored this book. I have so many favorite quotes and scenes tagged in the margins. The writing was gorgeous and descriptive and woven in with humorous lines in such a beautiful style that I could not read fast enough. Rogerson is definitely going to be a must-buy author for me from now on. To be honest, the blurb for this book gives away too much of the plot, and if you can avoid it, read An Enchantment of Ravens without much background. Suffice to say, Isobel is a renowned portrait artist, in high demand by the nearby faerie courts and well-versed in dealing with their manipulative ways. Commissioned to paint a portrait of the Autumn Prince, Rook, she unexpectedly captures an emotion of sadness in his eyes, embarrassing him in front of his court on the portrait’s reveal. Livid, Rook returns to drag her back to face her consequences. That’s all you need to know, now go read the book.

This book’s stunning writing was filled with descriptive, poetic phrases that was a fantastic break in pace from the style and speed of the action-adventure sci-fi/fantasy books I had been reading previously. The language, word choice, and sentence construction were more advanced than typical of YA books, but fit the high-end writing style (and I do love well-written purple prose). This story contained quite a bit of violence (e.g. tearing off his finger), but was disguised in such a poetic style that everything remained consistently beautiful.

I love the classic fantasy love story, and this far exceeded my expectations. While I was afraid at first that she had fallen “madly in love” with Rook upon their first encounter in a sad show of instalove, I very much loved how she realized this wasn’t really love and remained furious with him for much of the book. The gradual build from there was wonderful.

Frankly, I had no idea how anyone knew if they were in love in the first place. Was there ever a single thread a person could pick out from the knot and say “Yes–I am in love–here’s the proof!” or was it always caught up in a wretched tangle of ifs and buts and maybes? (138)

The sassiness and back-and-forth between Isobel and Rook was humorous and overall the emotional component of this book was well-developed and fully believable. The humor never felt out of character or “too modern” but lent itself well to the style of the writing. And I absolutely loved Rook’s show of overconfidence, while he still remained somewhat shy and generally adorable.

“I’m going to turn you back. Try not to struggle, as I haven’t had a great deal of practice with this sort of magic. That is to say,” he added quickly, “I’m perfectly capable of doing it–I am sure you’ve noticed I excel at all enchantments–but it would be best if you remained still.” (200)

I spent much of the book wondering how it would actually end. Could they possibly make it against such terrible odds? The plot moved well and contained a few unexpected twists that fit well into the storyline. While the narrative could be a little haphazard at times, it fit the nature and setting of the story well.

I cannot think of any other word for this book but beautiful. The cover, the writing, the story. I am obsessed. This was just a really fantastic and pleasurable book to read. Here’s another quote, just because I can, and to show you yet another example of the humor woven into this book so well. Please go read An Enchantment of Ravens.

“Stop that.” Rook looked around, as if concerned someone might witness him mismanaging his human. I howled even louder. “Isobel, you simply must control yourself!” (82)