Filled with ludicrous twists and despicable characters, I can’t say A Simple Favor was good, but it was addictively ridiculous and I couldn’t stop reading.

You’d be amazed by what people will do. Things they’d never admit to anyone—not even to themselves. 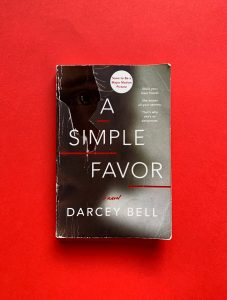 1.5 stars.  This was just a bizarre book.  It was also somehow strangely addictive, maybe because of the number of ludicrous twists the author managed to stuff into one book? I rarely read thriller contemporaries (and definitely can’t handle the terrifying movie adaptations), but I love Blake Lively and Anna Kendrick, so I figured, “try the book!” and then my coworker happened to bring it in so. Who am I to argue with destiny?  I can’t say A Simple Favor was a good book, but it was…a bizarrely addictive read.

Stephanie is a mommy blogger living off her deceased husband’s money in suburban Connecticut when she is befriended by a hotshot NYC-working mom, Emily.  When Emily disappears and her husband Sean is under investigation by the police, Stephanie believes it’s her “duty” to come to his and his son’s aid…in any way she can.  Things turn sour quick.

All three characters were pretty despicable.  While this may have been Bell’s goal, I found it difficult to empathize with anyone. Yes Stephanie, Emily, and even Sean wanted to be good parents.  But that really didn’t justify their…overall terrible natures. The POV rotates between the three MCs, which works well to explain their motivations, but I found Sean’s POV rather boring; we already knew most of what he had to say through Emily’s POV.  I did however really like the format of this book with Bell’s use of Stephanie’s blog posts to move the plot along by revealing bits and pieces of the past and present. It was particularly fascinating to read the persona Stephanie put out in the world versus who she was in real life (social media nowadays?).

The twists of this book were…so bizarre that I was not at all surprised when Stephanie revealed her Final Big Secret to Emily.  I will say that each new reveal or development was well executed and waiting to see “what more could possibly happen” held the reader’s attention for the entire course of the book.  However, the actual events were just so strange that I found myself being pulled out of the book in disbelief.

All-in-all, I wouldn’t say I regret reading this, but I would only recommend A Simple Favor to people who want an addictive (like watching a train wreck), fast-paced beach read about three annoying and/or despicable characters in ludicrous situations. (Or to people also too chicken to watch the movie adaptation.)